A preview of Quest's official setting

Our next Kickstarter campaign is nearly a month away, and we're ramping up previews of our new character and treasure catalogs. Today we're going to talk about how these two new catalogs will be the seed from which Quest's official setting will grow. Some of the characters and treasures you'll see in 2021 will set up narratives we're planning to unravel in the future in campaign books and even official shows.

So far, we've designed Quest's official setting with suggestions. That means we've named characters, items, and situations that imply a world around them, but we don't say what that world has to look like or how it works. This is meant to allow each story to use our narrative tools without weighing them down with too much lore.

While we will eventually develop richer lore for specific settings and worlds, we prefer the suggestive approach because of its flexibility. The new character catalog provides 100 characters that can be used completely independently of one another, but we've also embedded lots of relationships between them that suggest narratives and worlds around the characters.

Let's start zoomed all the way in to a local view, and then bring the camera out to the whole omniverse.

Several groups of characters in our new catalog are potential allies and adversaries, and can easily be used to drive an entire narrative.

The Prismatic Prophet, with their following of Opaline Acolytes, is said to be doing the nefarious bidding of larger and more mysterious forces. As the Prophet's cult infiltrates the seat of power in the region, other characters will be drawn into conflict with the group. One possible conflict is with The Tyrant: a young and unready ruler whose Regional Guard is divided about whether to support the Tyrant's rule. 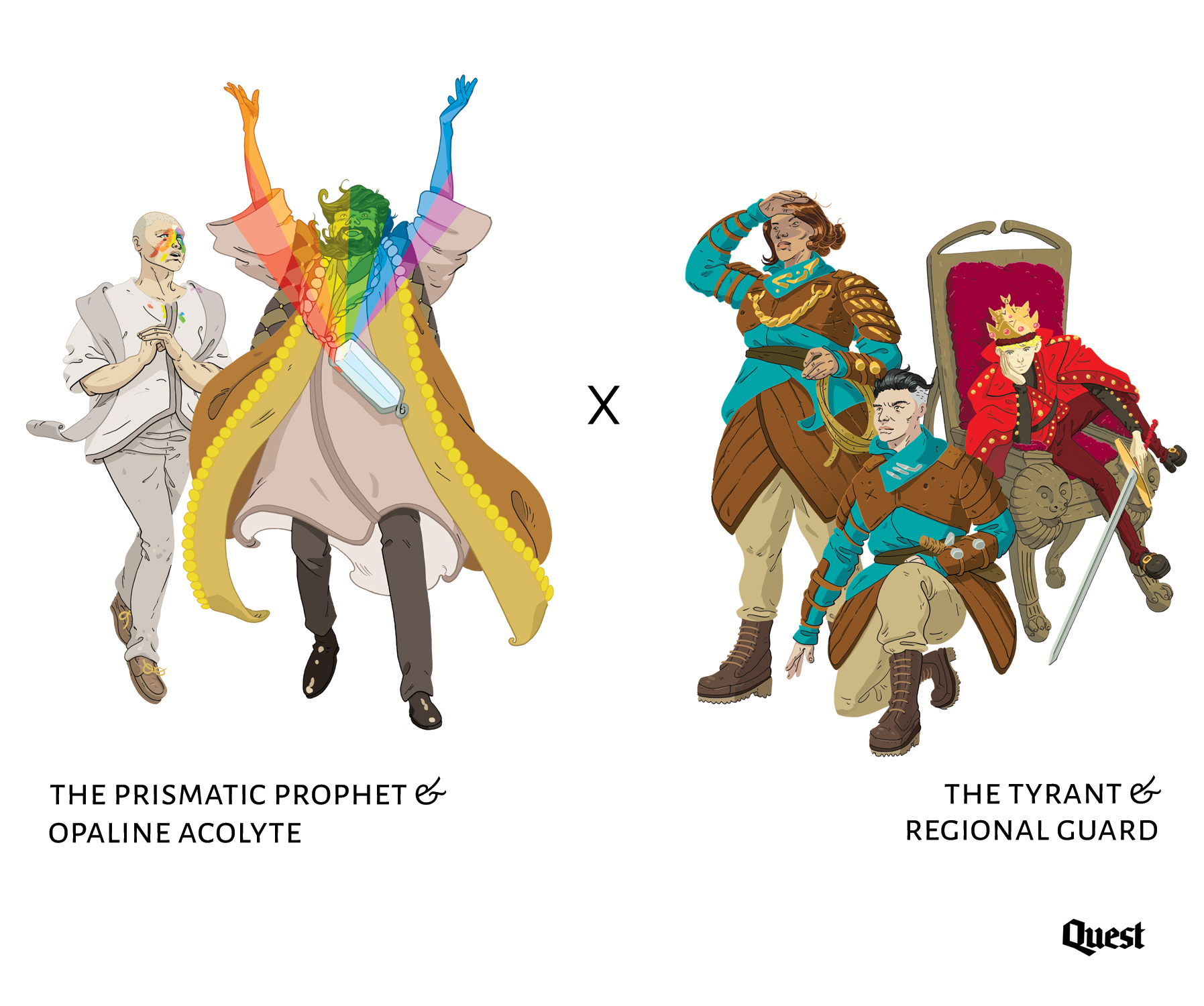 The catalog contains many clusters of characters like these with readymade interests, coalitions, and conflicts. Their relationships, both explicit and implicit, can help instantly set up an engaging story in Quest or other roleplaying games.

Quest's omniverse is designed so that every story told in the game is linked to every other story. This includes untold stories from future editions, like our Cosmic Fantasy Edition coming later in 2021. We're already setting up these bonds with characters and items in our new catalogs.

Spoiler warning: if you plan to play as a main character in a game of Quest, you may want to stop reading here to preserve the secrets of the Conservators.

With a single magic item in the very back of the original Quest Game Book, we set up the future of cosmic conflict in the game that will span every edition and setting imaginable: the Conservator's Ring. 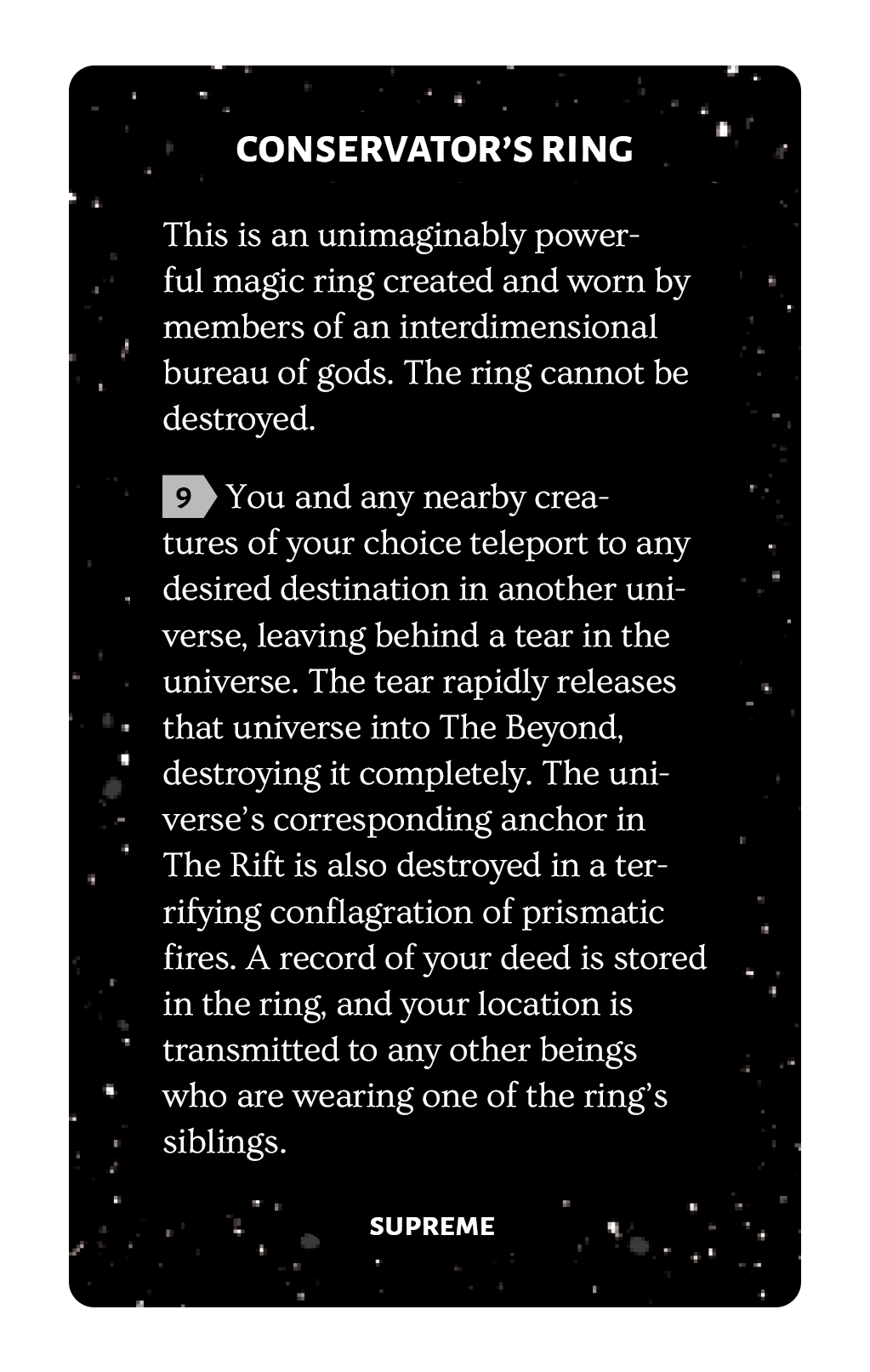 The text on this treasure card reads:

This is an unimaginably powerful magic ring created and worn by members of an interdimensional bureau of gods. The ring cannot be destroyed. When activated, you and any nearby creatures of your choice teleport to any desired destination in another universe, leaving behind a tear in the universe. The tear rapidly releases that universe into The Beyond, destroying it completely. The universe’s corresponding anchor in The Rift is also destroyed in a terrifying conflagration of prismatic fires. A record of your deed is stored in the ring, and your location is transmitted to any other beings who are wearing one of the ring’s siblings.

Now, we're ready to reveal that this ring belongs to a small council of interdimensional beings known as Conservators. 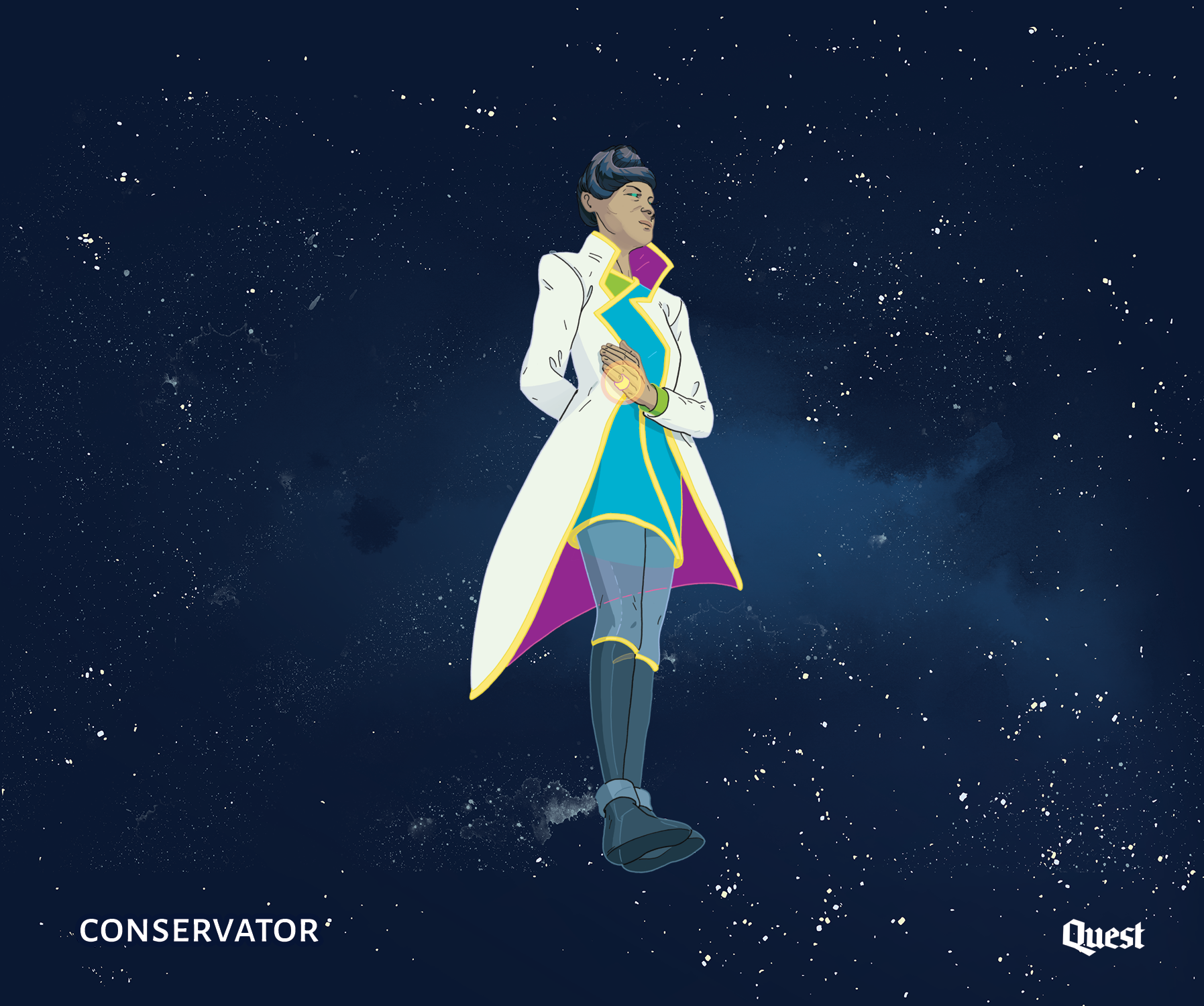 The mission of the Conservators is to preserve balance in the omniverse. They meet once every thousand years to identify lost universes that ought to be reclaimed. A universe is considered "lost" to the council when the balance of cruelty in that universe exceeds its kindness and hope. Ironically, this dooms such universes with the unimaginable cruelty of the Conservators.

With the power of their rings, forged in the limitless realm of The Beyond, Conservators reclaim lost universes by completely destroying them and returning their energy to the omniverse so that new universes can be made.

This is just a small peek at what's coming in Quest. You'll find that our new characters and treasures work together to build worlds and stories, and we'll continue to leave enough room for you to claim them as your own.