Meet some of Quest's new characters

We're thrilled to say that our first expansion, Quest: Fantastic Characters and Wondrous Treasures, has been fully funded on Kickstarter! We're grateful and excited to move forward and get these new books and decks in everyone's hands.

Today we're introducing four characters from our new catalog to highlight the ways that our characters interact and can help build a world for your story. Our approach to world building in Quest is to create implied worlds; instead of drawing a map and filling everything in for the players, we create characters, treasures, and other things that can act as story prompts.

Some of our characters have intimate and important relationships, like these two pairs of characters. First, let's meet Button Dwellers and their forest friends, Harvesters. 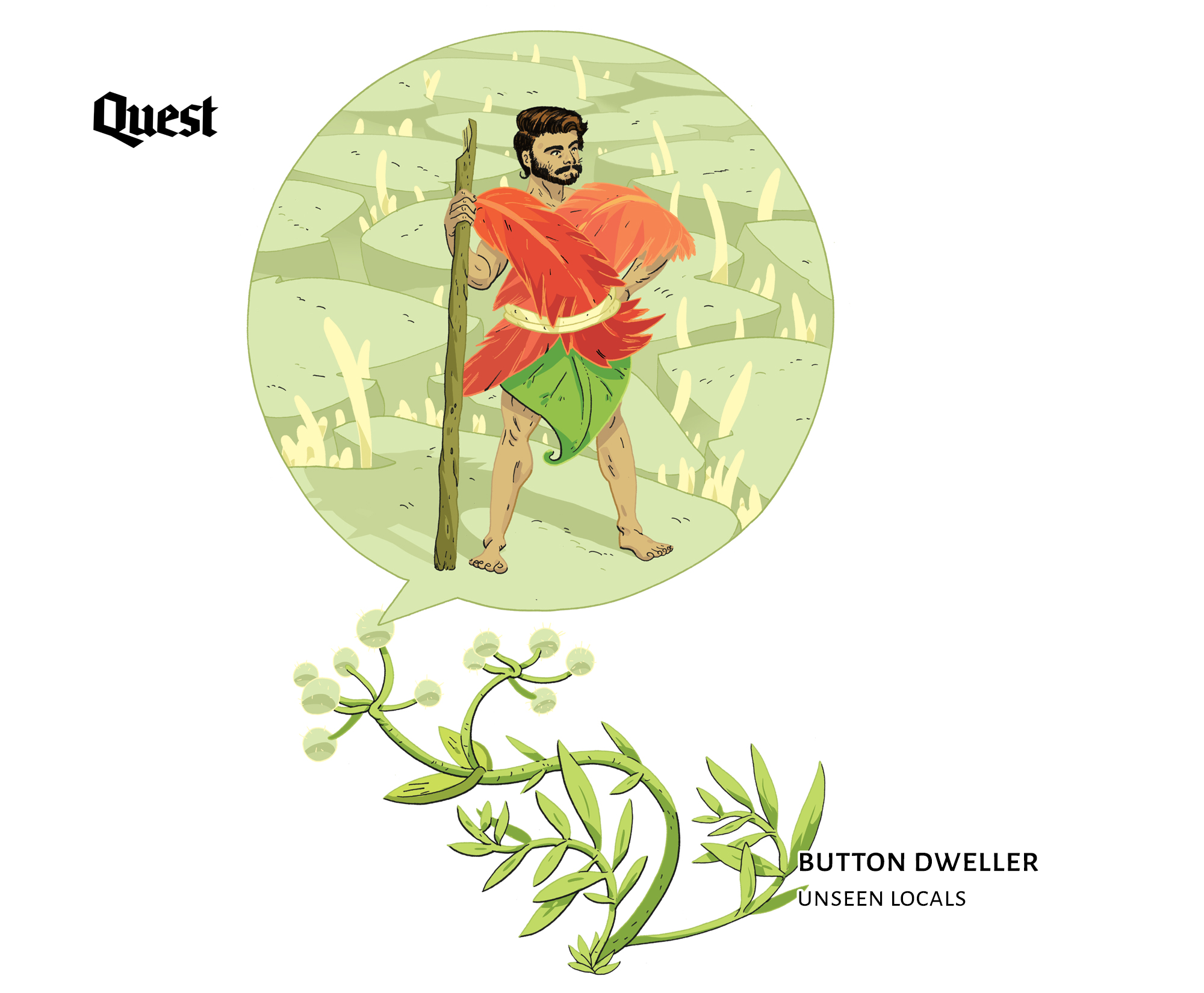 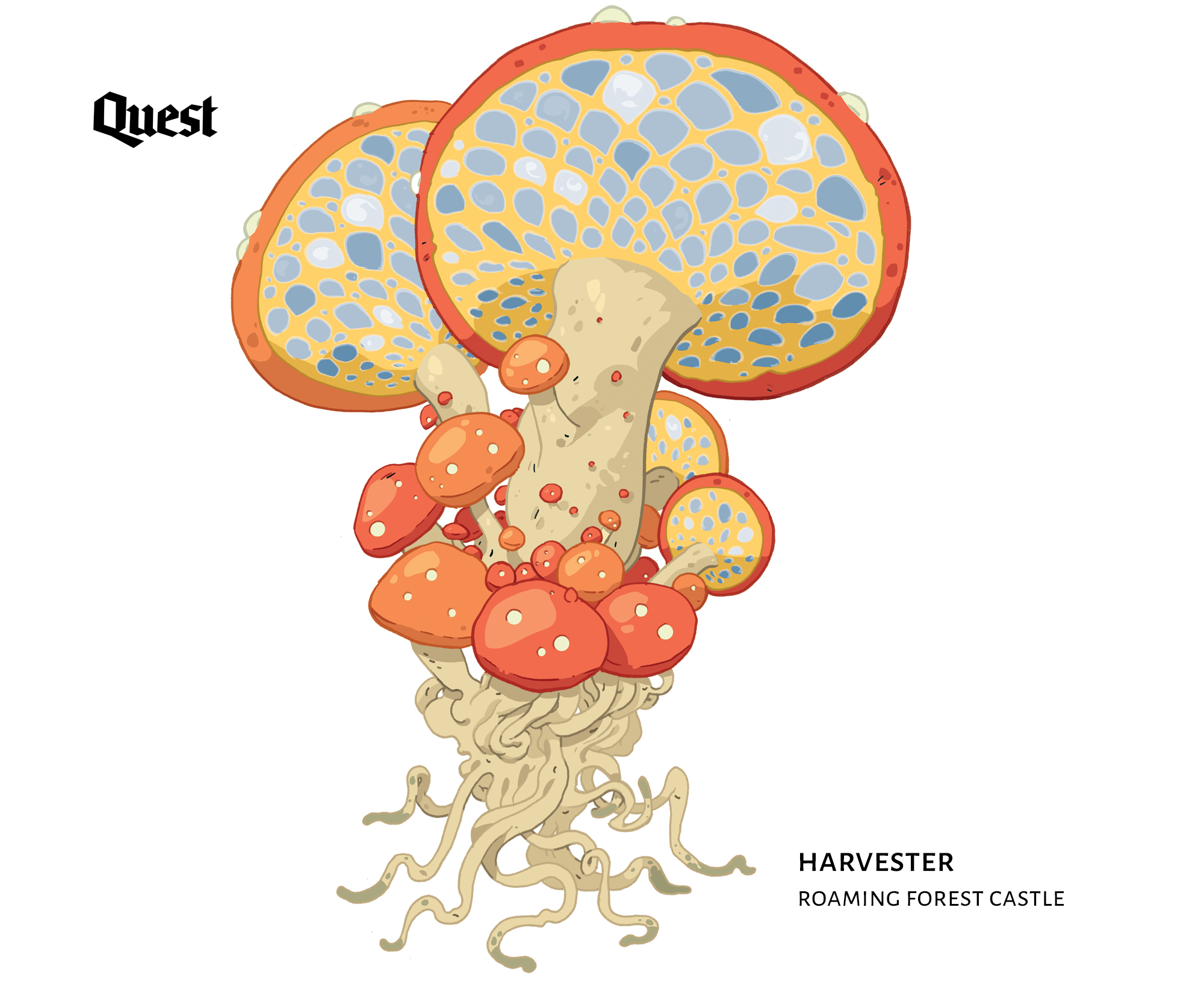 Button Dwellers are among the most diminutive beings in the omniverse. They live short and fast-paced lives; a 30-year-old Button Dweller is generally thought to have had a good run. The stature and lifespan of Button Dwellers has made them quick to learn and quite adaptable to their circumstances. Many among them are able to produce small-scale magic.

Sadly, many larger beings are unaware of Button Dwellers, and accidentally trample their towns. Dwellers are usually able to protect themselves from these threats, and occasionally they will lure creatures in and shrink them to engage in diplomacy.

Harvesters are large, animated mushroom creatures that wander the land to consume and trap spirit creatures. Each time a harvester is harmed, it releases a spirit, reflecting an attacker's damage back upon itself.

Button Dwellers use Harvesters as their castles, making them a natural pair of characters to use together in your story. Because Button Dwellers have the capability to shrink larger beings to become their own size, you can imagine a play session or even an entire story that takes place inside of a Harvester.

Next, it's time to meet Bonekind and Blood Jellies. 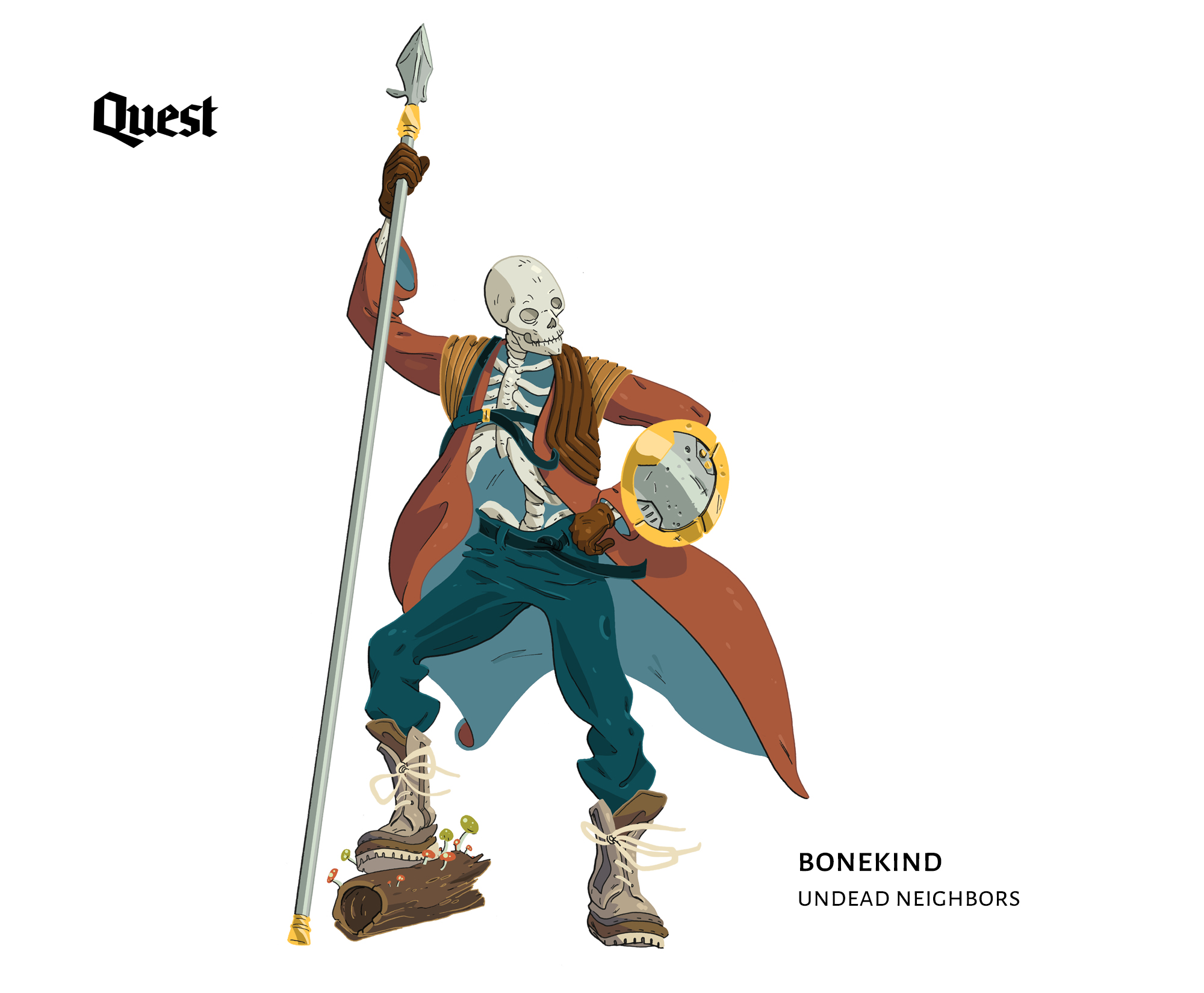 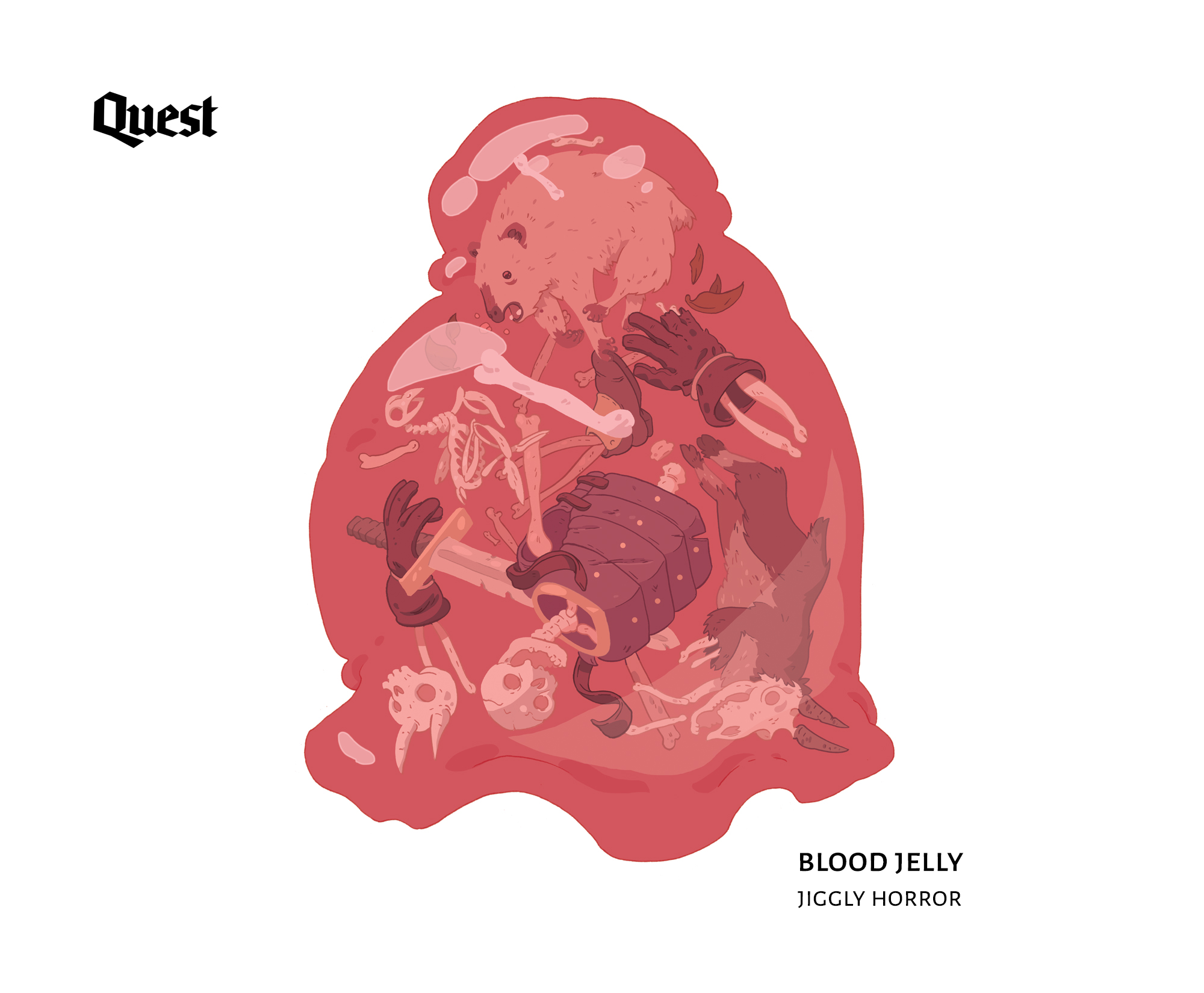 A spell that was meant to bring a loved one back to life backfired, becoming a contagious magical plague that enchants the bodies of those it affects. (The disease is now known as “Spry Bones.”) When a living creature affected by Spry Bones dies, they are reanimated as Bonekind. Bonekind are born with the personalities and memories of their former selves, but many eventually shed their past and grow completely new identities.

Bonekind are skeletons enchanted with false life and the spirit of their former selves. In many worlds where they are present, they stand alongside the living as members of society. Some Bonekind societies only allow those who have grown new identities, while others attempt to perfectly maintain the traditions of the living.

Blood jellies are hungry, amoeba-like creatures who live in dark areas and feed on both fresh creatures and those who have recently died. They grow large in especially dangerous areas where there are plenty of adventurers to feed on.

Jellies are a byproduct of the Spry Bones plague that is responsible for creating Bonekind (p. 64). When a creature affected by the disease dies, their blood leaves their body and pools, quickly congealing and morphing into a jelly. Once a jelly has formed, it consumes its parent body, causing it to rapidly decompose. When only a skeleton remains, the jelly spits it out, and it is reborn as Bonekind.

Because of their role in transitioning life, Blood jellies are considered sacred to many Bonekind societies. Blood jellies instinctively know not to harm Bonekind, and often live among reclusive Bonekind communities that prefer to keep other kinds of creatures away.

A radical community of Bonekind known as Marrowkin worships a physical deity known as The Great Jelly. It is a single blood jelly that has become a gargantuan being thanks to a ritual where its worshippers merge newly created jellies with its body. Marrokin raiding parties roam the land, seeking jellies to capture and bring to assimilate with The Great Jelly. 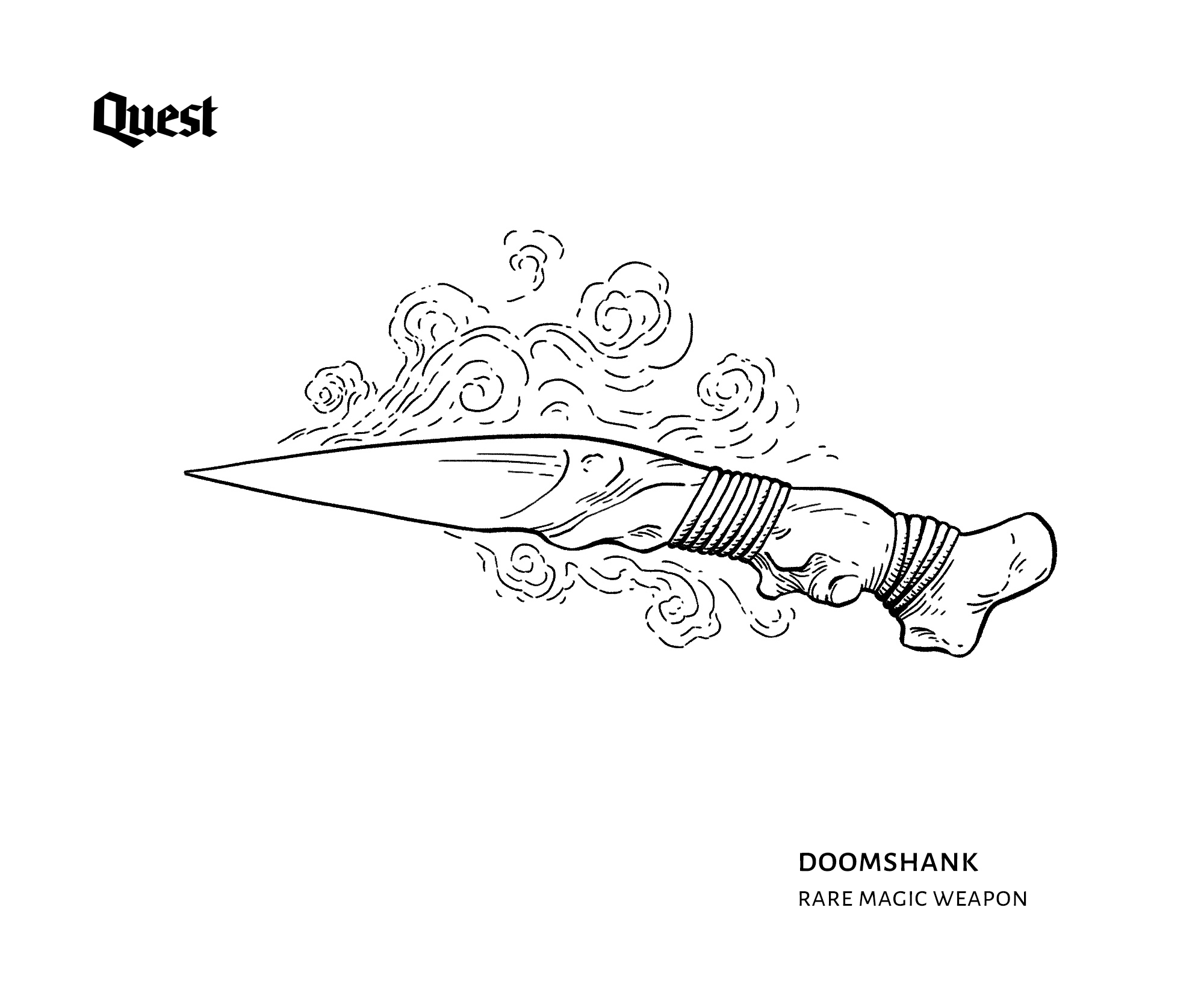 Our new Character Catalog and Treasure Catalog also have entries that interact with each other. The Doomshank is a magic weapon that, when delivering a fatal blow, turns its victim into Bonekind.

Stay tuned for more previews of our Fantastic Characters and Wondrous Treasures expansion, and be sure to back it on Kickstarter while you can!