We're thrilled to officially announce that Quest: Cosmic Fantasy Edition is coming in 2022. The new edition of the game is based on science fantasy and expands the core game with six new exciting roles. All of the new roles are completely compatible with Quest's original classic fantasy roles, meaning you can bring your favorite characters from the classic fantasy edition to the expanded game.

A Kickstarter campaign for the Cosmic Fantasy Edition will happen later this year at a time to be determined. To stay updated, subscribe to our newsletter here.

Artist Grim Wilkins has returned and brought the Cosmic Fantasy Edition to life with stunning illustrations. We're thrilled to unveil the draft cover for this new book: 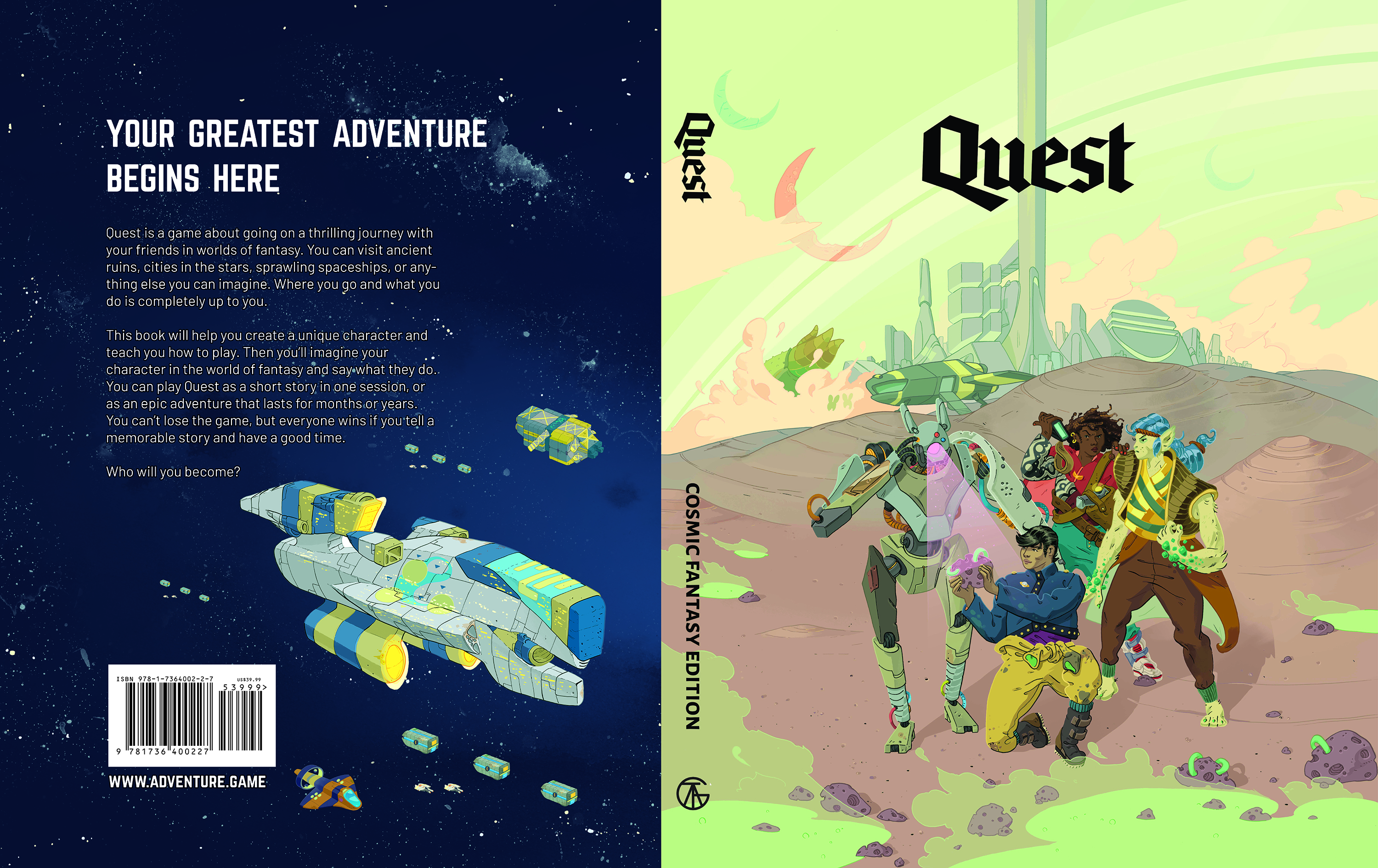 The cover of the book features a group of adventurers examining a strange creature in the steamy sands of an outworld planet. But trouble, as always, creeps on the horizon. The group's scout alerts their comrade of an attack on the distant spaceport by an interplanetary scourge known as the Krasix. (The Krasix are already a part of Quest, and can be found in our recently-released Character Catalog.) 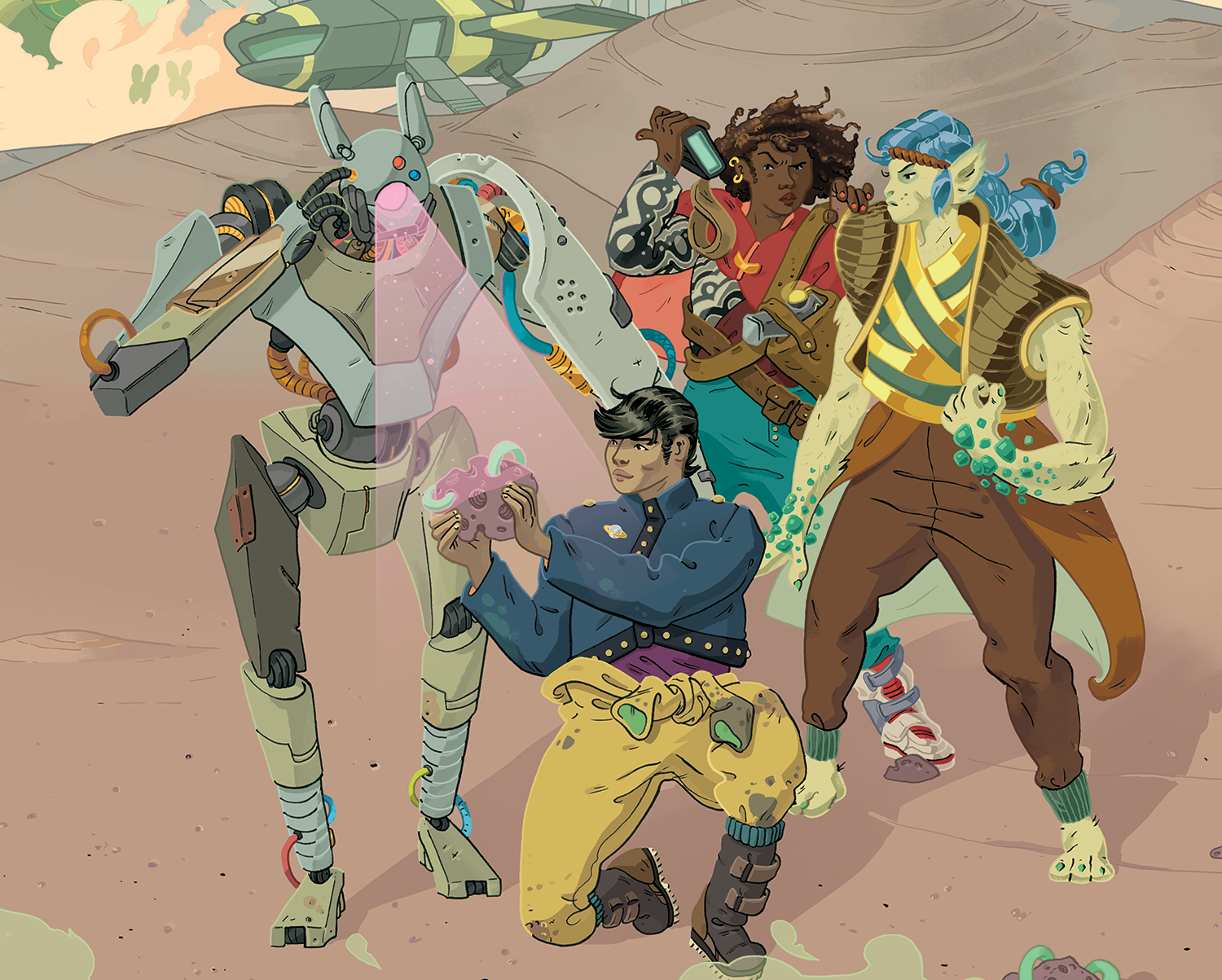 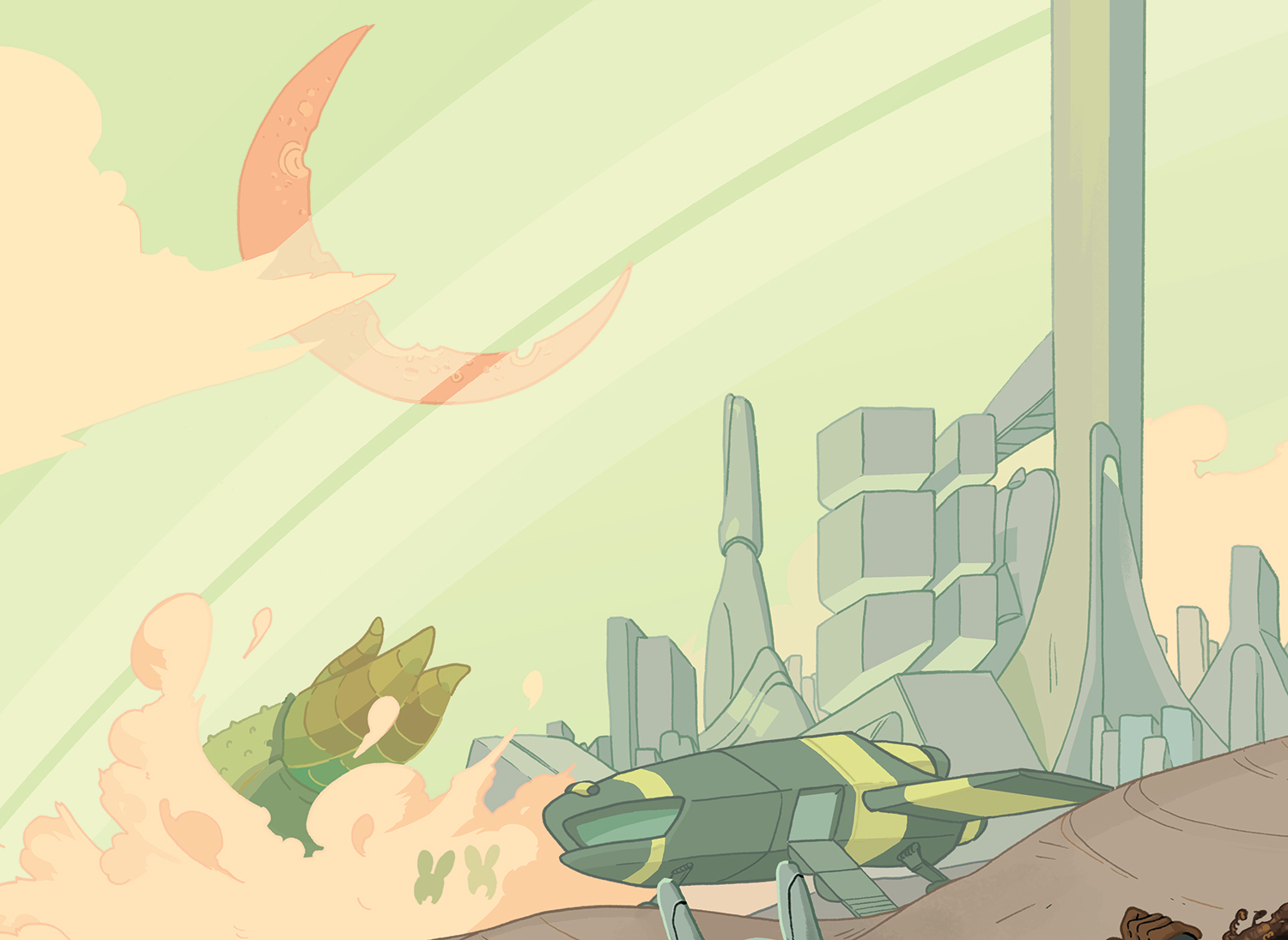 Quest: Cosmic Fantasy Edition has six powerful new player-character roles that bring unique capabilities to the adventure. As we approach our Kickstarter campaign, we'll release more detail for each new role, including previews of their special abilities.

Today we're unveiling the final two new roles: The Evo, and The Robot. 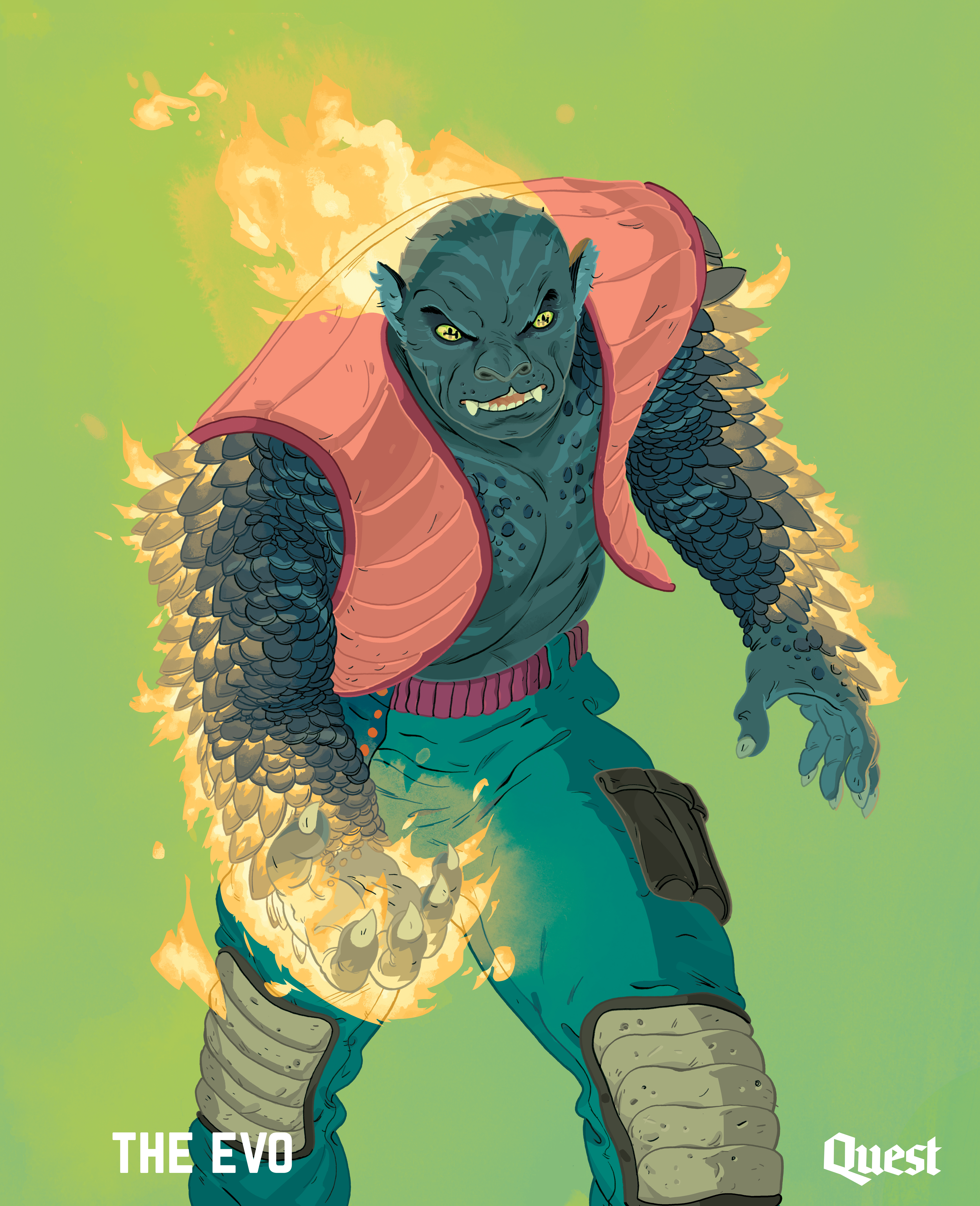 The Evo is a character who has tapped into the forces of evolution. They are able to mutate their body on demand to achieve supernatural ends. They are one of the most adaptable kinds of beings in the omniverse. 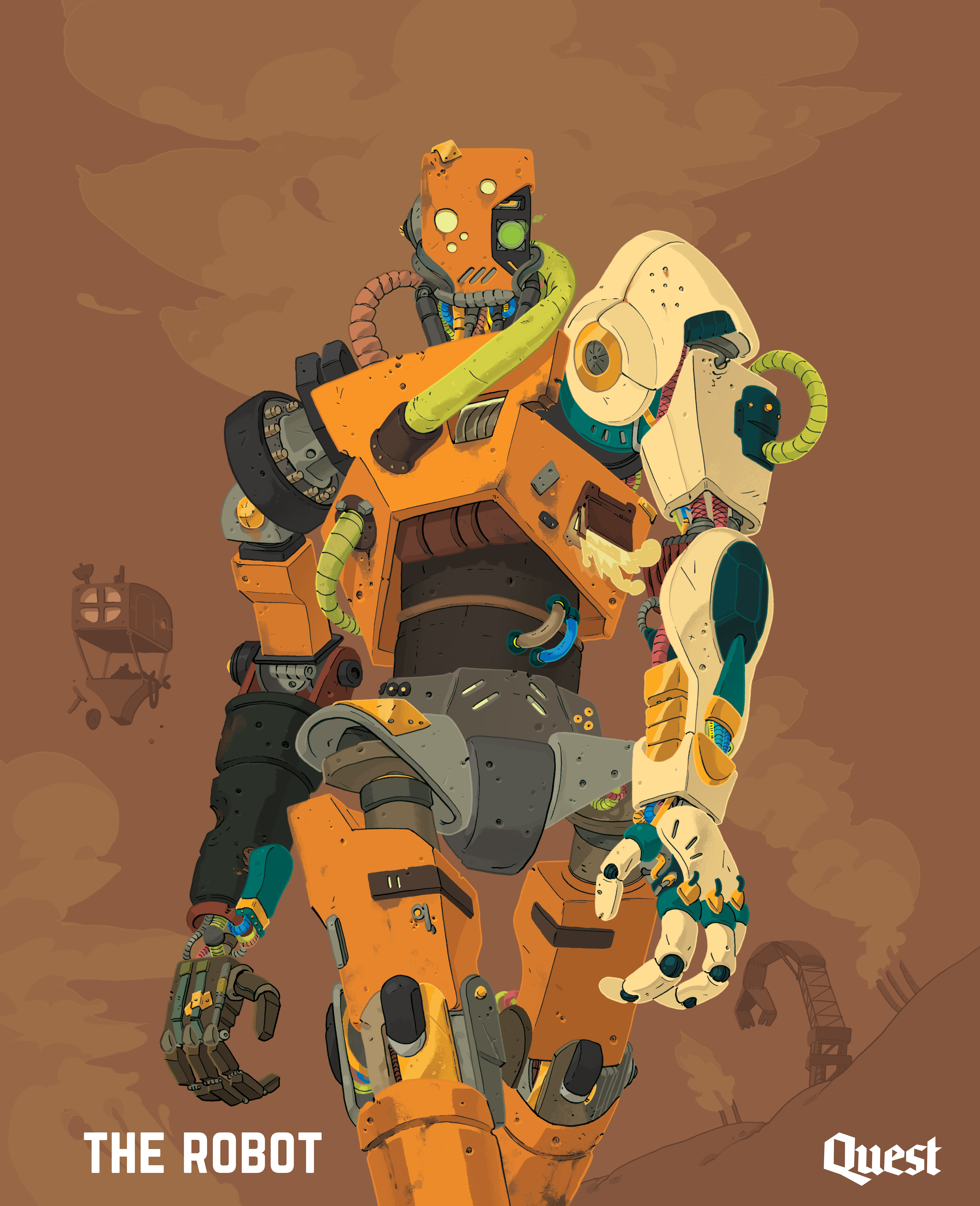 The Robot is a machine that contains multitudes. One of the most dynamic characters in Quest, they can upgrade, change, and rewrite their story to no end.

The Evo and The Robot complete the new cast of Quest's characters, previously announced on Twitter.

The Maverick: a bold daredevil who feels equally comfortable with a blaster or a turn of phrase.

The Operator: an expert tinkerer with a dizzying arsenal of tools and expansive know-how.

The Dreamer: an empath who can gaze into the souls of others and manipulate mental energies.

The Locus: a supernatural space wizard who can tap into the fundamental forces of the universe.

The Evo: an evolutionary wonder who can shape their own physical reality to achieve amazing feats.

The Robot: A modular platform for weapons, artificial intelligence, and learning. 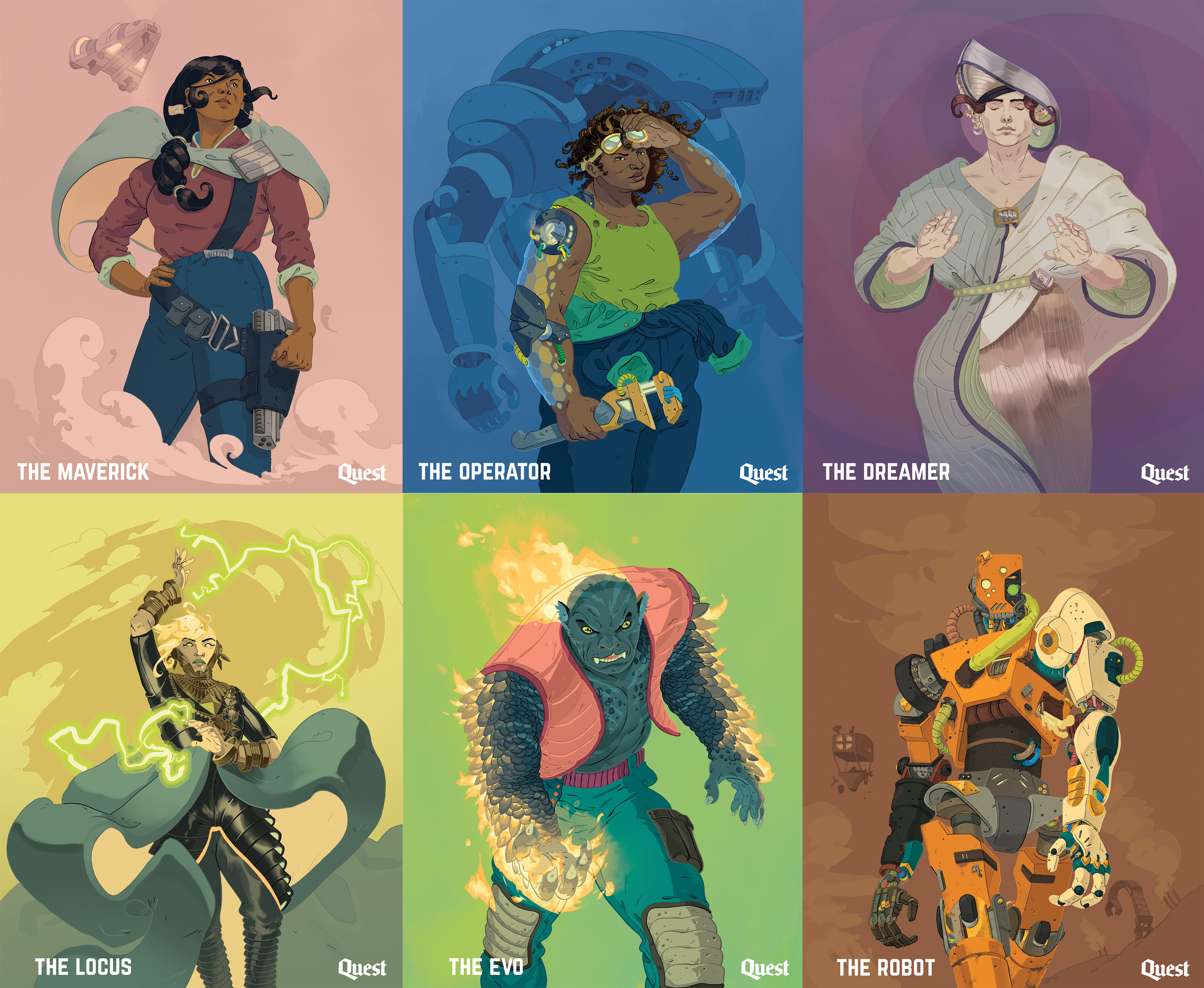 And one more new role.... The Guide

We're excited to announce a new universal role that will be incorporated into both the Classic Fantasy and Cosmic Fantasy Editions of Quest: The Guide.

From the beginning of Quest, The Guide has been a player at the table who helps share the story equally with the player characters. (This role is also known elsewhere as the Dungeon Master or Game Master.) But even in Quest, which is designed to be easy-to-learn, The Guide's open-ended responsibilities can be a significant challenge for new players.

We realized that The Guide can become a role just like any of the other roles in Quest, with its own abilities & learning paths. The Guide's responsibilities and powers will not change, but their new learning paths & abilities will provide useful prompts that will help the game's narrator know what to do in a scene. There will be abilities for everything from controlling the weather, manipulating the environment, springing traps, and introducing challenges and setbacks for the players.

Quest's Cosmic Fantasy Edition uses the same core ruleset as the original edition. But we're adding some light new rules that expand on the core ruleset to handle space travel, exploration, and conflict. These new interstellar rules will use the same principles we've built into Quest's core ruleset, including relative systems that make it easy to participate in the story and keep the narrative moving forward crisply. We'll provide more detail on this system as we approach a public playtest of the game.

Along with these rules, we'll provide a catalog of starships in the book that the players can acquire or encounter in their travels. Each starship will act like a character in the story with its own unique abilities, provided by the ship's subsystems. These subsystems can be upgraded and replaced, allowing players to customize their ships like they would their own character.

Illustrator Grim Wilkins has imagined a fun and colorful fleet for you to take on your adventure in the stars. Here are a few of the ships you'll find in the catalog. 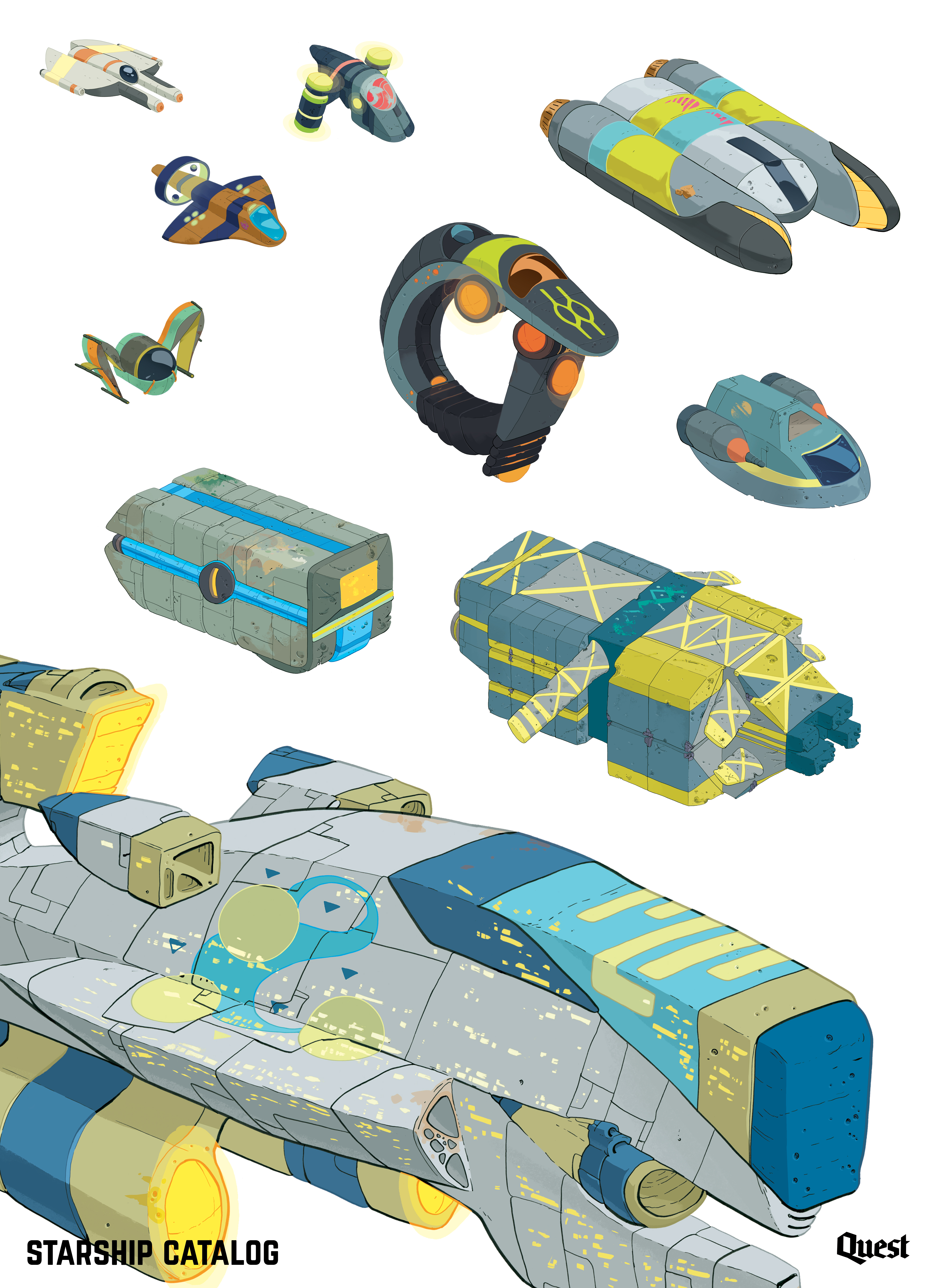 We're proud of our beautiful hardcover Game Books, but not everyone needs all of the information contained in the main Game Book at the table. So we're making a softcover Role Book to serve as a character creation and ability reference resource for the player characters at the table.

The Role Book will contain all 14 of the core roles from the Classic Fantasy and Cosmic Fantasy Editions. Plus, we're including a number of new Specialty Roles that combine abilities from various roles while adding a few of their own flavorful tricks. Each new Specialty Role will have a new unique legendary ability.

Here are two of the new specialty roles that you might expect to see in the Role Book:

The Shadowknight: A hybrid Invoker and Doctor with the unique ability to enlist underworld forces across the omniverse.

The Architect: A hybrid Spy and Magician that can create unique potions and artifacts.

After two very difficult years on planet Earth, we're slowing to a more deliberate pace for Quest products moving forward. As a (very) tiny publishing company, we've taken on a lot of big challenges beyond game design. So we're redirecting our energy in 2022 and beyond to focus on what matters: designing a game you'll love.

After we're done fulfilling the Treasures & Characters expansion from 2021 for all backers around the world, we're going to re-focus solely on the US market. We will seek international partners to sell and distribute Quest in the future, but once our inventory is cleared out for our 2021 Kickstarter fulfillment, our company will no longer directly fulfill international orders. Our experience attempting to expand to Canada, the EU, and the UK this year has shown us that we need more scale and staff to accomplish international growth in a way that makes everyone happy with the experience. We're just not there yet.

While we know this will be disappointing to Quest fans around the world, we hope you'll understand that selling globally is a huge (and expensive) undertaking for our part-time team. If Quest explodes we'll reconsider this plan, but for now we need to invest our resources and attention on goals we're sure we can meet to our standards. With a tighter focus on our backyard market, we'll be able to breathe easier and make sure we fulfill rewards for all customers as smoothly as possible.

We've also learned that great things take time and shouldn't be rushed. So the future of Quest will be finished "when it's ready." While we'll keep everyone posted on product developments, we're no longer going to set release dates or windows far in advance. When our work is ready, we'll surprise you!

We're hard at work writing the rest of Quest's next big chapter and there's lots more to share... when it's ready. Stay tuned by following us:

Thank you as always for being great players and fans. We can't wait to show you the rest of the Cosmic Fantasy Edition this year.